Summer vacation wasn’t filled with swimming pools and pick-up basketball for 23 students at Rock Ridge High School. It was spent working with bacteria and DNA under microscopes in a lab.

The Rock Ridge High School International Genetically Engineered Machine (iGEM) Competition Team is working to create a living vaccine that will eliminate Lyme disease in Loudoun County and hopefully throughout the biosphere. Unlike most treatments, this vaccine aims to treat ticks that transmit the disease rather than the person infected.

“Once you have Lyme disease you might be cured for a couple of years, but it’s likely to spike back up,” said Vignesh Valaboju, a rising junior at Rock Ridge. “The living vaccine and the plasmid that we’re making have genes that will prevent Lyme disease from ever occurring again.” 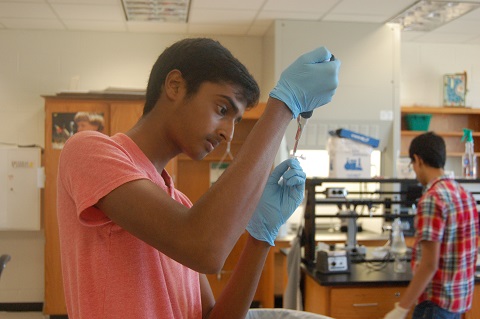 Through genetic modification, they’re creating a tick that won’t be able to be infected with Lyme bacteria. They add the gene to the vaccine bacteria so it can be transferred from parent to offspring. Once the ticks with the new modifications are released into the wild, they will naturally mate and pass on the mimic bacteria.

“If that tick bites a human it won’t be able to transmit Lyme disease because it will never be established in the first place,” said Mario Saavedra, an AP biology teacher at Rock Ridge. “The whole population can really quickly acquire the disability.”

They also added a fluorescent color indicator, an easy way to distinguish an infected tick.

“You can see which ticks have our living vaccine because if you shine UV light on it, it will fluoresce red or green,” Saavedra said.

Since this new method can infect almost any kind of insect cell, it becomes a global solution. The system could be used to fight off other diseases such as West Nile, Ebola, yellow fever and any other insect-borne disease.

“When we do this project it’s not just solving Lyme disease. It’s going to send a message to other doctors out there that this is another type of way to combat other types of diseases,” Valaboju said. “Even if our method isn’t successful, someone else might properly do it and solve the problem.”

Lyme disease is the most commonly reported vector-borne illness in the United States. In 2013, 95 percent of confirmed Lyme disease cases were reported from 14 states, including Virginia, where almost 1,000 cases were confirmed that year.

According to the Centers for Disease Control and Prevention, there were 935 reported cases of Lyme disease in Loudoun from 2007 to 2011. That is more than double the amount reported the previous five years.

Many people don’t know that they’ve been bitten by a tick. That person could be infected with Lyme, but may not know until five years later when they have the chronic symptoms.

To help solve this problem the team is building an app to educate the public about Lyme disease. The app offers tips from doctors on how to avoid getting bit by a tick, how to properly remove infected ticks and gives background about the disease.

“It will infinitely increase our outreach,” said Jacob Jasin, a rising sophomore at Rock Ridge who is creating the smartphone app. “We’re having it marketed out there for global use.”

The app also uses Google Earth where users can drop pins to identify places where they’ve been bit. This process creates hot spots that give a more accurate depiction of higher risk places for people to avoid.

iGEM is an international competition that hosts professors, scientists and students from all over the world.

In collaboration with the University of Virginia, the team will enter their work in the MIT-sponsored competition Sept. 24-28 at the Hynes Convention Center in Boston.