Veterinary professionals are no strangers to the stealthy spirochete Borrelia burgdorferi—but the discovery of spirochete-like cells in a 15-million-year-old amber-encased tick reveals that the bacteria have been lurking around long before humans walked the Earth.

The discovery was made by George Poinar Jr., a paleoentomologist, parasitologist and one of the world’s leading experts on plant and animal life forms found preserved in amber. In fact, you may remember the amber-encased mosquito in the plot of the wildly popular Michael Crichton novel and movie Jurassic Park. Poinar’s early research is said to have inspired the story. 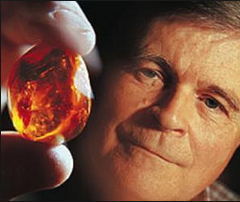 In a 2014 paper published inHistorical Biology, Poinar and researchers from Oregon State University (OSU) studied fourAmblyomma tick larvae encased in 15- to 20-million-year-old amber from the Dominican Republic. Each larva was examined for the presence of internal microbes, and one specimen contained large numbers of spirochete-like cells, which most closely resemble those of the present-day Borrelia species, in the hemocoel and lumen of the alimentary tract. This is the oldest fossil evidence of ticks associated with such bacteria.

“Ticks and the bacteria they carry are very opportunistic,” says Poinar, also a professor emeritus in the Department of Integrative Biology of the OSU College of Science. “Ticks are a more important insect vector of disease than mosquitoes. It’s likely that many ailments in human history for which doctors had no explanation have been caused by tick-borne disease.”

Much like their modern-day counterparts, ancient ticks probably picked up spirochetes when they took blood meals from infected animals. And while there were many possible spirochete-harboring hosts in the area where this study’s juvenile tick probably lived, Poinar believes it’s more likely that the spirochetes were passed to the tick from its mother, in a process called vertical transmission. Poinar points to the fact that the young tick didn’t appear to have any blood in its gut, so he and his researchers could not be certain it had indeed fed.

The bacterium was granted its own genus and named Palaeoborrelia dominicana. While it is impossible to know how closely the ancestral spirochetes relate to modern Borrelia, its location within the tick’s alimentary tract indicate clear ties.

Poinar is confident his discovery also has modern implications. “Paleoentomology is a powerful tool to learn about early lineages of insect vectors and also early lineages of pathogens that the vectors carried going back to 100 million years. It shows that pathogens are very ancient and have co-evolved with their hosts over millions of years, which makes them so widespread and difficult to control today,” he says.